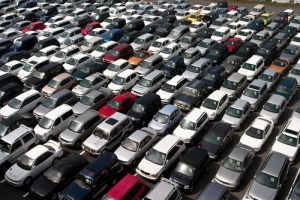 The year ahead is going to be a good one for the car industry, with plenty of growth and technology enabling more Americans to be better informed and find the perfect car for them. But auctions will be the most exciting part of the industry in the New Year, as more consumers look for cars that are both unique and collectible.

Car buying habits vary greatly from one nation to the next. For example, in the UK it is likely that the bulk of cars will continue to be sourced from franchised dealers. A UK-based survey found the 49% of consumers are expecting to buy cars from franchised dealers, with private sales (23%), used car dealers (16%) and Internet traders (8%) close behind. Just 3% of respondents anticipate buying a car from auction.

But in America the story is very different, and auctions have a major role in the industry. With rising gas prices, people are driving shorter distances, and because car reliability over the long term is ever increasing, people are opting to instead spend money on inexpensive used cars. New car sales have been steadily declining in America since 1976, even as used car sales have been increasing, and we expect that this trend will continue into the future.

You can get inexpensive used cars at auction, but there’s more to the growing popularity of auctions than that. In America the demand for collector cars is growing year on year. In 2013 it became a billion dollar industry for the first time, with $1.3 billion sold at public auctions. In August of 2014 alone there were three of the ten largest sums paid at auction for a single car. Not all of those were sold in the US, but it’s a sign of the growing demand for collector cars. The value of cars sold via auction has risen exponentially from the $33,000 average in 2004, and the number of cars sold has also jumped from the 8,600 sold at the time. Auctions have become the dominant way to acquire rare and unique vehicles for American collectors.

This growth trend means that car auctions have been robust despite market trends threatening to put even the used car industry under some stress. A sign of a looming competitive market is a declining number of vehicles per household, especially in heavily urbanised areas where public transport networks have been steadily improving in terms of coverage and reliability. However, in more rural areas that are lacking robust public transport services, cars are still very much in demand.

So what kinds of cars will people most commonly be buying? In 25% of the more heavily urbanised areas of the US, it’s cars that will dominate purchases. But in the other 75% of the country, trucks - and the Ford F-Series in particular - have dominated sales. The F-Series alone outsold the other two top selling cars (the Camry and the Altima) in the first quarter of sales in 2014, and that trend shows no signs of abating, despite the increased cost of running trucks when compared to cars.

One other key trend we will see continue to develop in 2015 is the demand for electric vehicles. With Tesla making inroads into the affordable electric vehicles market, we’re also seeing vendors such as Kia, Cadillac, and VW all making in-roads with new electric vehicles. And some states, such as California, are experiencing double or triple digit year-on-year growth of electric vehicle sales. There is also legislation on the way that will require electric car charging within business parking lots, which will help further generate the proliferation of charging stations that will be necessary for the vehicles to start being attractive for daily use.

Finally, online and social media will have a big impact on car sales into 2015, with Google planning on playing a larger role. Customers will be able to go into negotiations better prepared following some online research into the best prices that they should be paying for their cars, and the ability to leave and read feedback will have an impact on a dealer’s business.

But this is also an opportunity for businesses, with the social media and digital engagement opening up valuable marketing opportunities. We believe that the increased availability of information online will make it easier to find the right auctions to attend in order to find those favourite vehicles.